There are 489 cities and towns in Gauteng, the smallest of South Africa’s nine provinces. But it has much to be proud of. Although it covers less than one and a half per cent of the country’s land area, it contributes most of all to the economy, about one third, and also around seven per cent of the GDP of the whole of Africa!

The word Gauteng means Place of Gold in the local language Sesotho, an appropriate name as the province sits above forty per cent of the world’s gold reserves. And Johannesburg, the capital city and also the country’s largest city, is also know as Egoli, meaning gold. Although gold is still important in the province, manufacturing and finance are thriving. A staggering ninety seven per cent of the population lives in urban centres! 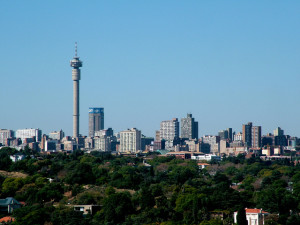 Johannesburg City is one metropolitan municipality with an area of over one and a half thousand square kilometers. By comparison Sydney’s municipality is slightly smaller. Some clever person once worked out that it would take 3 days to walk from the southernmost suburb, Orange Farm, to the center of the city. I wonder if anyone ever tried to prove it!

While Johannesburg is the capital city of Gauteng, its neighbour in the north is Pretoria, capital of South Africa. Johannesburg is often called Joburg or Jozi by its residents and as the biggest city in South Africa, is sometimes compared with Los Angeles. Both have a large urban sprawl which is linked by big highway interchanges.

Modern skyscrapers adorn the Joburg skyline, and two very tall TV and radio towers make the skyline distinctive and easy to recognize. This modern view contrasts with African medicine shops and Indian bazaars which have been there for a hundred years. Fruit sellers and vendors line the streets of the central city area.

There is a revival of the central city after years of neglect. Art studios, theatres, open-air arenas and exciting restaurants with a distinctly Africa feel are popping up all over reflecting an exciting blend of western and ethnic cultural activities is reflected in throughout the city.

Huge mine-dumps and headgear remain visible, particularly to the south of the city and surrounding Soweto, although they are slowly disappearing as mining companies, with new advanced extraction methods are recycling they dumps to find minute amounts of gold. I guess it must be profitable or the wouldn’t be doing it!

Soweto is south of Johannesburg is, and was originally developed under the apartheid system as a township for black people. Soweto is an abbreviation of South Western Township and is home to over two million people.

The greater Johannesburg area incorporates Germiston, Springs, Boksburg and Benoni in the east, and Krugersdorp and Roodepoort in the west. Vereeniging and Vanderbiljpark to the south of Joburg are important industrial and coal-mining towns.